This letter from the Department of Health of the Tibetan Exile Government is a clear abuse of Human rights. It requires all its employees to abandon their faith in Dorje Shugden or resign.

Everyone should be free to follow the faith of their choice without interference from others (especially their government). 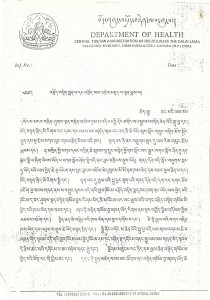 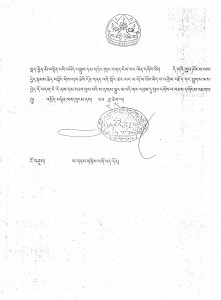 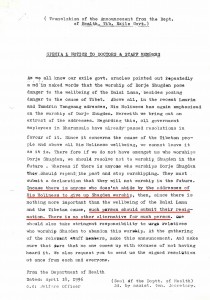 If you are unfamiliar with the principles of Human Rights and Religious Freedom, please read the United Nations Declaration on the Elimination of All Forms of Intolerance and of Discrimination Based on Religion or Belief
http://www.un.org/documents/ga/res/36/a36r055.htm(The first three articles are quoted below):
Article 1
1. Everyone shall have the right to freedom of thought, conscience and religion. This right shall include freedom to have a religion or whatever belief of his choice, and freedom, either individually or in community with others and in public or private, to manifest his religion or belief in worship, observance, practice and teaching.
2. No one shall be subject to coercion which would impair his freedom to have a religion or belief of his choice.

3. Freedom to manifest oneâ€™s religion or beliefs may be subject only to such limitations as are prescribed by law and are necessary to protect public safety, order, health or morals or the fundamental rights and freedoms of others.

1. No one shall be subject to discrimination by any State, institution, group of persons, or person on grounds of religion or other beliefs.

2. For the purposes of the present Declaration, the expression “intolerance and discrimination based on religion or belief” means any distinction, exclusion, restriction or preference based on religion or belief and having as its purpose or as its effect nullification or impairment of the recognition, enjoyment or exercise of human rights and fundamental freedoms on an equal basis.

Discrimination between human beings on grounds of religion or belief constitutes an affront to human dignity and a disavowal of the principles of the Charter of the United Nations, and shall be condemned as a violation of the human rights and fundamental freedoms proclaimed in the Universal Declaration of Human Rights and enunciated in detail in the International Covenants on Human Rights, and as an obstacle to friendly and peaceful relations between nations.