1. The Dalai Lama is a religious dictator.

In 1642 the 5th Dalai Lama assumed both temporal and spiritual authority over Tibet. He became a self-appointed God-King, an absolute ruler, making decrees not just over their mundane affairs but over their spiritual lives as well. Assad can torture your body but he cannot destroy your faith or your soul, so to speak.

A religious dictator has the power to do both.

In 1996 the current Dalai Lama the 14th banned the practice of Dorje Shugden. Dorje Shugden is regarded as an enlightened being by 4 to 5 millions of Buddhists, primarily in Tibet, among Tibetan exiles, and in Mongolia, India and Nepal.

The reason for this ban, as will be explained elsewhere, was purely political, for the Dalai Lama’s own personal gain. But by cloaking it in spiritual rhetoric, the Dalai Lama uses people’s blind faith in him to create political gain and worldly power, causing immense physical and mental suffering to millions of people, creating schisms within Tibetan society, within monasteries, within families – including outbreaks of violence and forced expulsions. All among millions of people previously living peacefully and harmoniously together.

2. He is the longest lasting dictator.

Dictators come and go. The Dalai Lama has been in power since 1950. No one comes close to his staying power, not even Fidel Castro!

3. Most people do not even know that he is a dictator.

The word dictator is not often associated with the Dalai Lama. He hides behind the guise of being a holy man, and as he puts it, a humble monk, concealing that he is very much a politician who uses his spiritual position for worldly gain. Sometimes magazines etc. refer to him as a “God-King” as if this were a good thing! The United States of America is founded upon the separation of Church and State. The Dalai Lama is the very embodiment of the union of Church and State. We know through our own Western history very well the dreadful consequences of unifying Church and State (the inquisition anyone?) Far from being a Shangri-la, Tibetan history is full of the painful consequences of creating a religious state. In his banning of Dorje Shugden and his attack on Dorje Shugden practitioners, the Dalai Lama continues to demonstrate that he is a religious dictator. 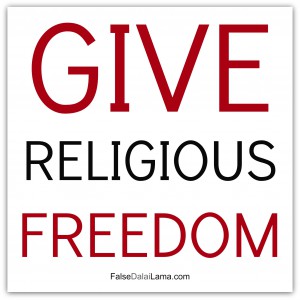