We would like to offer the following two pieces of information with regard to the blog in the Huffington Post written by the Tibetan, Tenzin Dorjee.

(2) The information presented in this blog is completely wrong, and we can only conclude that these are malicious lies.

Supporters of the False Dalai Lama have prevented loyal followers of Domo Geshe Rinpoche who practise Dorje Shugden from entering Gaden Chöling monastery in Darjeeling to perform the 49th day death ceremony for the caretaker who cherished the monastery for decades.

So-called “Buddhists”, following the False Dalai Lama and CTA’s incitements to discrimination and hatred against their own countrymen, have gone so far as to prevent prayers being said for a faithful monk’s fortunate rebirth. This is a terrible example of the schism the ban on Dorje Shugden practice is causing within the Tibetan exiled community.

This letter was received yesterday (June 17th 2014) by a nun at a Kadampa Buddhist Center in California. It appears to have been sent from Oakland, CA, by four people with Tibetan names representing “The United Front of the Tibetan People”. It contains a clear incitement to violent action against “traitor Tibetans” and “foreign Dolgyal people” - people who have dared to stand up to and criticise the Dalai Lama and Central Tibetan Administration: “we must take strong and physical action against them” and “teach them lesson”.

Those threatened in the letter include the 34 Tibetans listed by the CTA on its website as “Dolgyal” protestors, as well as other Tibetan and western Shugden practitioners around the world. These people are innocent of any crime: all they have done is exercise their basic human right to free speech and their freedom of belief. 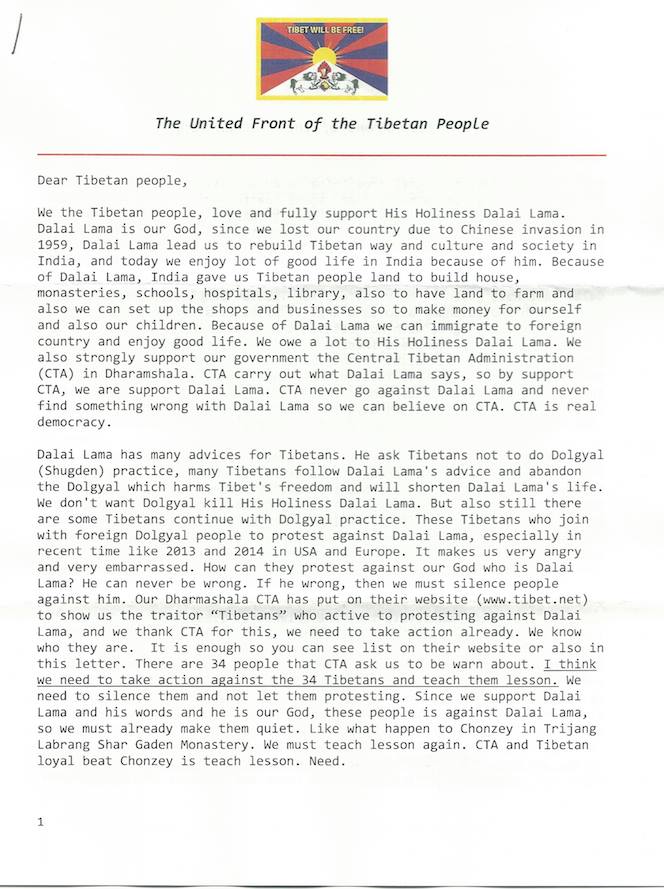 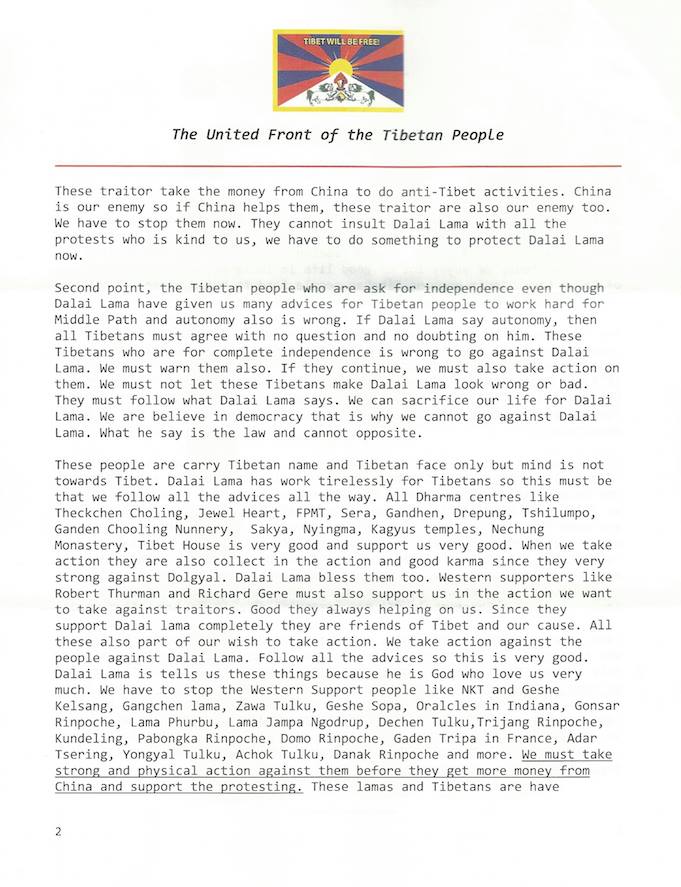 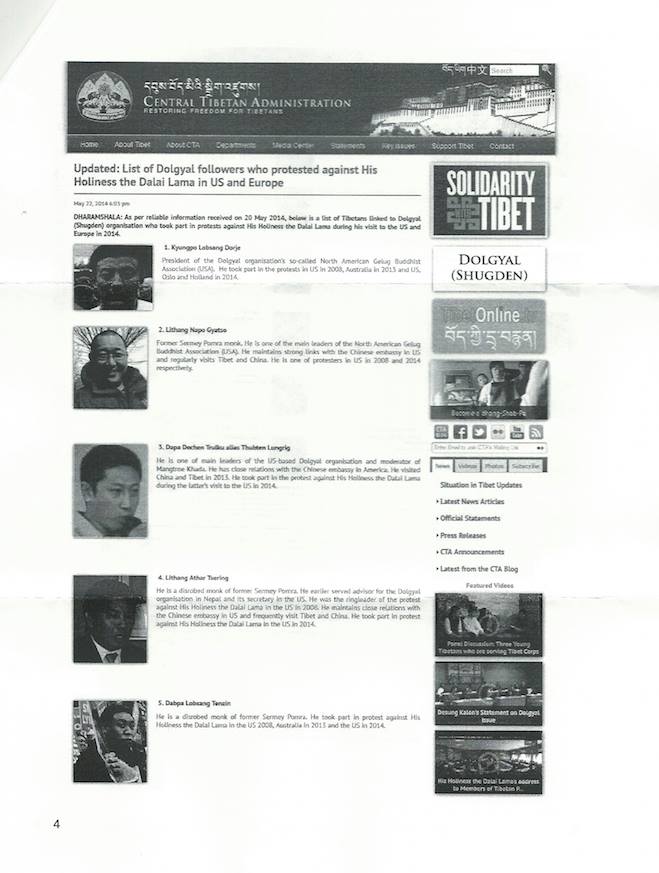 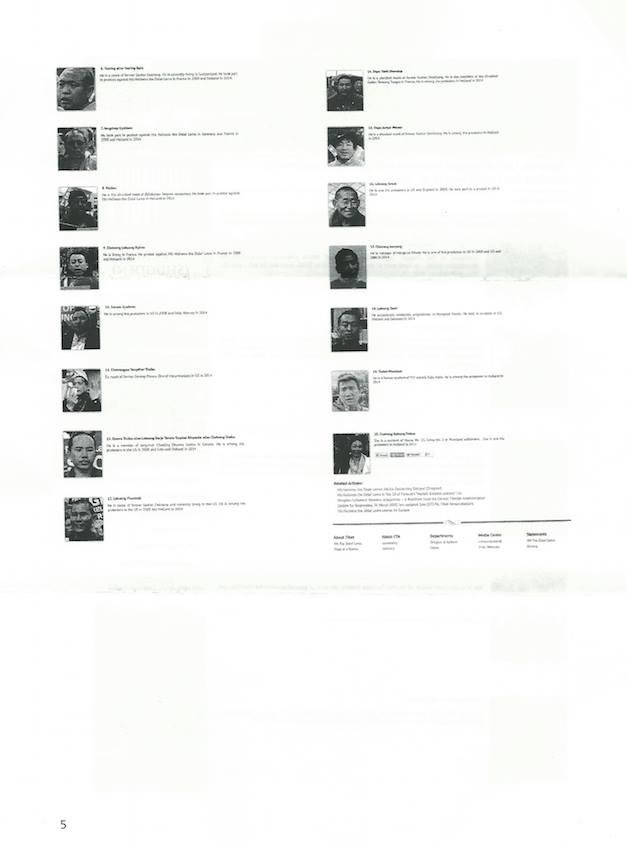 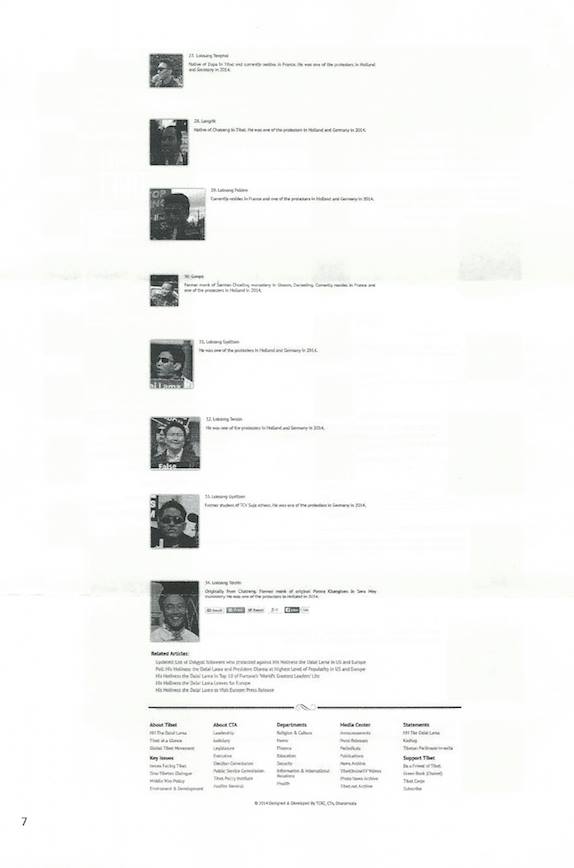 Responding to the CTA wanted list inciting violence against prominent Tibetan Shugden Buddhists, the ISC’s legal representative has written to each representative of the Tibetan Government in Exile. He has informed them that they will be held legally responsible for any harm that comes to these Shugden Buddhists as a result of the CTA’s actions.

The duty of a government is to care for all its citizens. The CTA does the opposite. The world is watching.

This information provided by the Dalai Lama is clearly an incitement to commit acts of violence against these twenty Tibetans.

We would like to publicly state that if any harm comes to any of these people the Dalai Lama will be held personally responsible.

The Dalai Lama has caused this kind of harm many times in the past, but this time the world is watching!